Any remarks or questions on the life of Sergei Vasilyevich Rachmaninoff can be posted here.
Post Reply
16 posts

After re-reading the Voice of Russia article about Natalie's and Sergei's wedding, etc. I noticed that some of the material came from Natalie's Recollections. I assume this is a book either written by her or written by someone she designated. I would love to read it. Does anyone know if this book is available?
Opus23#10
Top

StewH, please do not think I am ignoring you if you do not get a message from me. In spite of careful instruction from others, I manage to "lose" messages that I try to send, especially in the new forum "format". I usually need my son or son-in-law to stand over my shoulder and show me how things are done.
Opus23#10

No problem, my friend. I've posted a reply via another PM.
StewH
Top

I know there are Recollections - only few pages and they seem to be complete:

But I will try to get to know more about her recollections.

By the way, I can't believe that on this photo

there is Natalia's image, like it is written in the book "A Lifetime in Music", 2001
where I've found this picture actually. It says Sergei and Natalya with their first daughter Irina, 1905
It is obviously a misprint!
http://vk.com/Rachmaninoff_club
Top

Marianne, thanks so much for saying you will try to learn more about Natalie's Recollections. I will look forward to your posting.
At first I shared your idea that the date on the picture must be a misprint.
Then I recalled that Irina was born on May 14, 1903. This picture may have been taken on her second birthday, or when she was a young age two. What I thought might be a "teething ring" could be a bracelet, given to her to keep her quiet for the picture. Another reason she may seem small is that not very long after her birth she, as well as her parents, became very ill with something that seems to have been a serious strain of flu. They were very worried about her survival. (The 1956 edition has the same picture with the date as 1905.)
Opus23#10
Top

I'd like to weigh in here, if I may: The 2001 edition of "A Life in Music" is an exact reprint of the original 1956 edition, but with the addition of the long introduction by David Cannata. And I don't think the 1905 date for the photo can be that far off.
StewH
Top

Thank you so much for your answers!!!
Actually what I hesitated about was not the date but actually is it really Natalie on the photo, not somebody else? She lookes so different on all the photos in Ivanovka.
And it seems she (if she really she on this photo) lookes a bit older on this photo than her age. But I had a look on other photo: And now I see - the change of the hair-cut that makes her look older.
So sorry for my hesitations, and thank you for your replies!

They really seem to be ideal couple, ideal people.
I wish I knew what Rachmaninoff thought and knew of marriage, love and labour.
http://vk.com/Rachmaninoff_club
Top

Marianne, as for my being an amazing reader, let me just confess that I only remember what interests me, and the lives of the composers, especially Beethoven, Schubert, and SVR are absolute obsessions with me. (The two composers who have the most astonishing gift for melody -- in my opinion -- are Schubert and Rachmaninoff. SVR can take two or three ordinary tones and magically transform them.
Now about Oskar von Riesemann: Rachmaninoff was very displeased with the biography, and did not want it circulated. Sophia said that when she had talked to the writer about SVR's family life, etc. (prior to publication), that von Riesemann didn't even write down the info. she gave him. The discrepencies in the biography caused quite a problem between Rachmaninoff and his biographer. *** Then, von Riesemann had a heart attack, and SVR felt sorry for him and paid the cost of the printing.
Now, about the Church rules: While reading a book unrelated to SVR, I came upon the rule of the Russian Orthodox Church at the time that members must go to confession at least once every three years. An official was available to stamp a certificate that the member had done this. I suspect that this is where SVR had a problem.
As for the priest who helped obtain the dispensation, he may have helped in two ways: first, he probably researched the Canon (Church) law on the subject, looked for precidents and loopholes, and made a kind of legal case of his findings. Then he probably "walked" the important findings through the bureaucratic system so that Rachmaninoff's case did not sit on someone's desk for ten years.
Second, this priest, who was someone known by SVR's aunt, may have "talked with " SVR instead of insisting on confession. I had never heard anything about that.
At any rate, the whole thing brought to my mind the fact that SVR was honest enough to follow his beliefs, and not make a sham of his religious participation -- which would have been the easy way out. As for his religious feelings, I think they may be reflected in his Liturgy of St. John Chrysostom, which is one of the most beautiful and devout works I have ever heard.
Opus23#10
Top

Marianne, who are the other two people in the photo?
StewH
Top

They are his cousins, his wife sister Sofia and brother Vladimir Satin

They are also on his wedding picture: 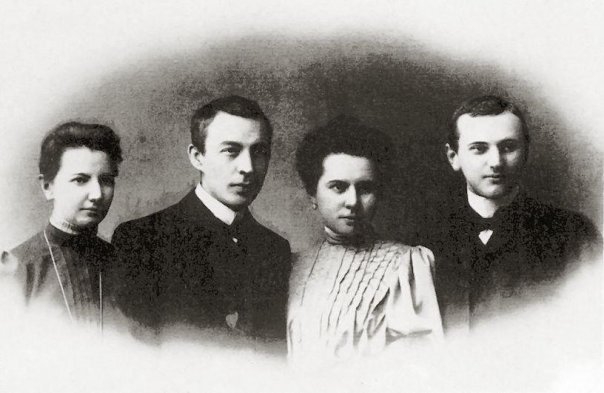 By the way, Sofia Satin left her recollections, and they are quite interesting.

opus23#10, thank you for such a detailed story. It seems impossible but you do know some things about church in those days that most Russians already don't.

Now, about the Church rules: While reading a book unrelated to SVR, I came upon the rule of the Russian Orthodox Church at the time that members must go to confession at least once every three years. An official was available to stamp a certificate that the member had done this. I suspect that this is where SVR had a problem.

Actually as long as I understand (I might be mistakening), everything was and is a bit more simplier - the wedding itself was performed in the church only. And before the wedding there are some rules for those, who want to marry - they have to make a confession and making one's communion. That's why they had to find priest that was friend.

The whole idea of what you write is completely true - he was religious but his religion was not in complete obedience of the church rules and ceremonies, he understood religion more thoroughly - since the childhood through listening the best church choirs of Novgorod and Saint-Petersburg... after listening he usually went home and tried to tune what he'd heard on the piano.

I wish I knew more about his visiting churches.. I've read somewhere that he went to the Easter night service in the church somewhere in USA...

As I understand he really payed for the changed version of Riesemann's memoirs, because after reading the first version he said there was too much "boasting" in the book. And as long as Riesemann wrote everything as if imitating the direct speech of Rachmaninoff, it seemed to be unmodest.
I've read Russian edition 1992, there was no a word that one could name as boasting, so I guess Rachmaninoff quite liked the last edition. And I find it very interesting and detailed.

PS I also love Beethoven but never really "heard" of Schubert, I mean we studied his music on the listening lessons in the music school, but not more.
http://vk.com/Rachmaninoff_club
Top

Marianne, thanks for the details about previous discussions. The reason I compare SVR to Schubert is that both had a genius for melody. Schubert wrothe 600 songs with marvelour piano accompaniments, chamber music, and symphonies. Here are some things you may enjoy: "The Trout" (Die Forelle) - quintet, chamber work, also song
"Octet"- amazing chamber work full of melody.
Symphony No.9 in C Major - "The Great"
Since Schubert was a contemporary of Beethoven, though younger, his music fits the style of his time. Rachmaninoff (regardless of what some critics of the time said) is 20th century in most of his music -- "painting with broader brush strokes" as music critics like to say.
(This is not on the subject of Natalie, but I hope you enjoy the music.)
Opus23#10
Top

Thank you, dear opus23#10, for your recommendations!
As soon as I study all the works by Rachmaninoff I'll start listening Schubert according to your advice... It's a pity I don't know Deutsch to understand his songs properly...
http://vk.com/Rachmaninoff_club
Top

Marianne, fortunately I discovered Schubert and all the other great composers before I rediscovered Rachmaninoff. Since then I am hooked on his works. I had only worked on two preludes as a student, and had heard the 2nd concerto, which I loved at the time. Only recently, about two years ago I heard the 2nd concerto on the radio, and that got me started listening to as many works as possible. A great rediscovery!

Thank you for telling me your preferences, I will find those pieces by Schubert.
I think I can guess what preludes you were playing

Here are some more pictures of them together: I guess the information in the article is wrong, because the photo looks similar with the previous one, and the date in the previous one is somewhere in the beginning of the 30-s
http://vk.com/Rachmaninoff_club
Top
Post Reply
16 posts