On the phenomenal hands of Sergei Rachmaninoff

In his book Rachmaninoff: Life, Works, Recordings, Max Harrison states that the virtuoso English pianist Cyril Smith once said that Rachmaninoff "could with his left hand stretch C–E-flat–G–C–G and the right could manage C (second finger)–E–G–C–E (thumb under)." Try it yourself. This is an amazing stretch!

The reason that Rachmaninoff's hands were so supple and phenomenal may have stemmed from a genetic disorder. In the British Medical Journal, in December 1986, D.A. Young states, 'The extraordinary size and extensibility of Rachmaninoff's hands might indicate Marfan's syndrome." Was he right? Click here for a link to the original article. 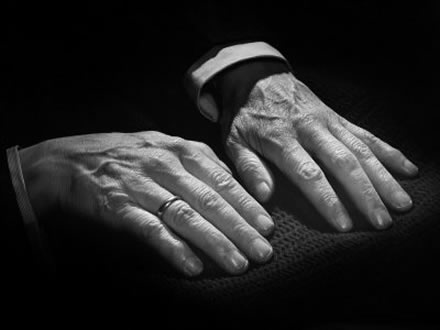 Twenty years after Young's publication in the British Medical Journal, in October 2006, an article in the Journal of the Royal Society of Medicine, by Dr. Manoj Ramachandran (Fellow in Paediatric and Young Adult Orthopaedics) and Dr. Jeffrey K. Aronson (clinical pharmacologist and physician in Primary Health) differed greatly from Young's speculation. This is what Ramachandran and Aronson in 2006 stated about Rachmaninoff's hands: "The size of Rachmaninoff's hands may have been a manifestation of Marfan's syndrome, their size and slenderness typical of arachnodactyly. However, Rachmaninoff did not clearly exhibit any of the other clinical characteristics typical of Marfan's, such as scoliosis, pectus excavatum, and eye or cardiac complications. Nor did he express any of the clinical effects of a Marfan-related syndrome, such as Beal's syndrome (congenital contractural arachnodactyly), Ehlers-Danlos syndrome, homocystinuria, Stickler syndrome, or Sphrintzen-Goldberg syndrome. There is no indication that his immediate family had similar hand spans, ruling out familial arachnodactyly.
Rachmaninovff did not display any signs of digital clubbing or any obvious hypertrophic skin changes associated with pachydermoperiostitis. Acromegaly is an alternative diagnosis. From photographs of Rachmaninoff in the 1920s and his portrait by Konstantin Somov in 1925 (Figure 1), at a time when he was recording his four piano concerti, the coarse facial features of acromegaly are not immediately apparent. However, a case can be made from later photographs...
During a heavy concert schedule in Russia in 1912, he interrupted his schedule because of stiffness in his hands. This may have been due to overuse, although carpal tunnel syndrome or simply swelling and puffiness of the hands associated with acromegaly may have been the cause. In 1942, Rachmaninoff made a final revision of his troublesome Fourth Concerto but composed no more new music. A rapidly progressing melanoma forced him to break off his 1942-1943 concert tour after a recital in Knoxville, Tennessee. A little over five weeks later he died in the house he had bought the year before on Elm Drive in Beverly Hills. Melanoma is associated with acromegaly and may have been a final clue to Rachmaninoff's diagnosis. But then again, perhaps he just had big hands." Click here for a link to the complete article.
Nowadays, it is possible to get a diagnosis in hindsight, even many years after a person has deceased. This can be accomplished by testing relatives. Rachmaninoff had two daughters, a couple of grandchildren and a few other relatives who would be eligible for genetic testing. Up till now such a test has not been performed.